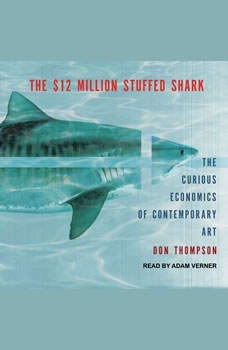 The $12 Million Stuffed Shark: The Curious Economics of Contemporary Art

Why would a smart New York investment banker pay $12 million for the decaying, stuffed carcass of a shark? By what alchemy does Jackson Pollock's drip painting No. 5, 1948 sell for $140 million? Intriguing and entertaining, The $12 Million Stuffed Shark is a Freakonomics approach to the economics and psychology of the contemporary art world. Why were record prices achieved at auction for works by 131 contemporary artists in 2006 alone, with astonishing new heights reached in 2007? Don Thompson explores the money, lust, and self-aggrandizement of the art world in an attempt to determine what makes a particular work valuable while others are ignored. This book is the first to look at the economics and the marketing strategies that enable the modern art market to generate such astronomical prices. Drawing on interviews with both past and present executives of auction houses and art dealerships, artists, and the buyers who move the market, Thompson launches the listener on a journey of discovery through the peculiar world of modern art. Surprising, passionate, gossipy, and revelatory, The $12 Million Stuffed Shark reveals a great deal that even experienced auction purchasers do not know.