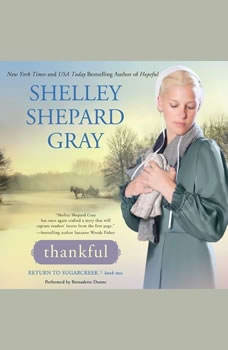 New York Times bestselling author Shelley Shepard Gray captures the beauty, devotion, and warmth of Amish life in this engaging tale of family, commitment, trust, and love set in the beloved community of Sugarcreek.Christina Kempf has always known that God chose Aden Reese to be her husband. As children, he was there to save her when she fell through the ice, and he’s been by her side ever since. After his parents died in a car accident ten years ago, the Kempfs raised Aden as one of their own, and everyone sees Aden and Christina as brother and sister. But Christina has never given up hope that Aden will one day ask her to be his wife.Aden always planned to court Christina. But losing his mother and father changed everything—except his love for her. Her parents generously welcomed him into their home and treated him like a son. He can’t betray their kindness by admitting his feelings for the girl who is like a sister . . . yet so much more.Pressured by her parents to court, Christina begins to accept the attentions of Sugarcreek’s young men, and now, Aden must make a choice. Will he stand by and watch the love of his life slip away? Or will he risk losing the love and trust of the family he holds dear to tell Christina how he truly feels?Thankful includes a P.S. section with additional insights from the author, background material, suggestions for further reading, and more.