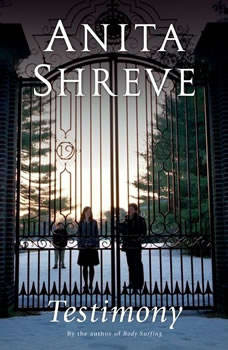 At a New England boarding school, a sex scandal is about to break. Even more shocking than the sexual acts themselves is the fact that they were caught on videotape. A Pandora's box of revelations, the tape triggers a chorus of voices--those of the men, women, teenagers, and parents involved in the scandal--that details the ways in which lives can be derailed or destroyed in one foolish moment.Writing with a pace and intensity surpassing even her own greatest work, Anita Shreve delivers in TESTIMONY a gripping emotional drama with the impact of a thriller. No one more compellingly explores the dark impulses that sway the lives of seeming innocents, the needs and fears that drive ordinary men and women into intolerable dilemmas, and the ways in which our best intentions can lead to our worst transgressions.

Anita Shreve is incredibly gifted at creating powerful, distinct voices that intertwine to reveal the details of a sex scandal at a private high school academy. While the reader is aware that nothing but tragedy can come out of the event, its development is heartbreaking. Shreve artfully plays with time and point of view to create a portrait of causes, actions, and resonating consequences set in a small town with a school where adults and adolescents alike learn harsh lessons. The novel is a quick but fulfilling read. Testimony is my first by Anita Shreve, and I will definitely be checking out her others.

Horrible, boring, stagnant. The whole flipping back and forth between narrators... no cohesive train of thought. Gave me a headache.

i loved it.... it showed how one lie can ruin several people's lives, not just one or two. it was hard to read and very graphic, but i liked it alot just the same.