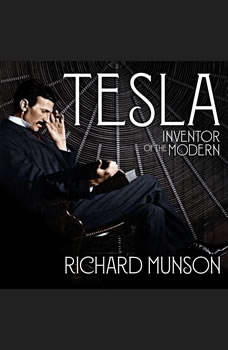 Tesla: Inventor of the Modern

Nikola Tesla, a Serbian immigrant, invented the radio, the induction motor, the neon lamp, and the remote control. His breakthrough came in alternating current, the basis of the electric grid and long-distance electrical transmission. This pitted him against Thomas Edison's direct current empire, and bitter patent battles ensued. But Tesla's technology was superior, and eventually he prevailed. Unfortunately, he had no business sense and could not capitalize on this success. His most advanced ideas were unrecognized for decades: forty years in the case of the radio patent; longer still for his ideas on laser beam technology. Tesla's personal life was magnificently bizarre. Strikingly handsome and impeccably dressed, he was germophobic and never shook hands. He required nine napkins when he sat down to dinner. In later years he ate only white food and conversed with the pigeons in Bryant Park. This clear, authoritative, and highly readable biography takes account of all phases of this remarkable life.

Soon to be a major motion picture, this is the first—and only—definitive authorized account of Neil Armstrong, the man whose “one small step” changed history.When Apollo 11 touched down on the Moon’s surface in 1969, th...

From Pulitzer Prize-winning author Edmund Morris comes a revelatory new biography of Thomas Alva Edison, the most prolific genius in American history. Although Thomas Alva Edison was the most famous American of his time, and remains an international...

James Gleick has long been fascinated by the making of science -- how ideas order visible appearances, how equations can give meaning to molecular and stellar phenomena, how theories can transform what we see. In Chaos, he chronicled the emergence ...

A sensation on its publication in 1859, The Origin of Species profoundly shocked Victorian readers by calling into question the belief in a Creator with its description of evolution through natural selection. And Darwin's seminal work is nearly as c...

Prepare to Meet Thy Doom: And More True Gaming Stories
by David Kushner

From "Masters of Doom" author, David Kushner, comes "Prepare to Meet Thy Doom”, a compilation of true gaming stories covering many facets of America’s biggest entertainment business: the video game industry. In addition to more than a d...

Called a madman by some, a genius by others, and an enigma by nearly everyone, Nikola Tesla was possibly the greatest inventor the world has ever known. He was, without a doubt, a trail blazer who created astonishing, sometimes world-transforming, d...

"I had never planned to become a savanna baboon when I grew up; instead, I had always assumed I would become a mountain gorilla," writes Robert Sapolsky in this witty and riveting chronicle of a scientist's coming-of-age in remote Africa. An exhila...