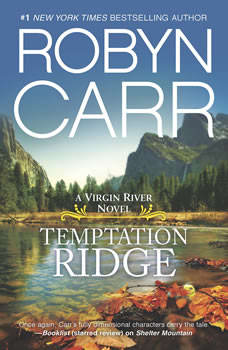 In RITA Awardwinning, New York Times bestselling author Robyn Carrs Temptation Ridge, two lonely hearts are surprised by love while visiting the close-knit mountain community of Virgin River. After caring for her terminally ill mother for five years, 25-year-old Shelby McIntyre wants to experience travel, college, and romance. And then she runs smack dab into Luke Riordannot exactly the collegiate Mr. Right of her dreams. A rugged Blackhawk pilot, Luke just retired from the Army after two decades, four wars, and three helicopter shoot-downs. At 38, hes tough as nails with a major in one-night stands and a minor in commitment avoidance. While Luke fears getting hurt again by a younger woman, Shelby isnt interested in a battle-hardened veteran. And yet sparks fly as these polar opposites try to withstand the force that draws them together. As this irresistible romance unfolds, Therese Plummers compelling narration masterfully captures the vulnerability and ardor of unexpected love.