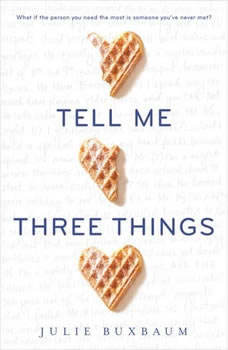 
What if the person you need the most is someone you’ve never met?

Funny and romantic, this tug-at-your-heartstrings contemporary YA debut is perfect for readers of Rainbow Rowell, Jennifer Niven, and E. Lockhart.

Everything about Jessie is wrong. At least, that’s what it feels like during her first week as a junior at her new ultra-intimidating prep school in Los Angeles. It’s been barely two years since her mother’s death, and because her father eloped with a woman he met online, Jessie has been forced to move across the country to live with her stepmonster and her pretentious teenage son.

Just when she’s thinking about hightailing it back to Chicago, she gets an email from a person calling themselves Somebody/Nobody (SN for short), offering to help her navigate the wilds of Wood Valley High School. Is it an elaborate hoax? Or can she rely on SN for some much-needed help?

In a leap of faith—or an act of complete desperation—Jessie begins to rely on SN, and SN quickly becomes her lifeline and closest ally. Jessie can’t help wanting to meet SN in person. But are some mysteries better left unsolved?

“Three Things about this novel: (1) I loved it. (2) No, really, I LOVED it. (3) I wish I could tell every teen to read it. Buxbaum’s book sounds, reads, breathes, worries, and soars like real adolescents do.” —Jodi Picoult, New York Times bestselling author of Leaving Time and Off the Page