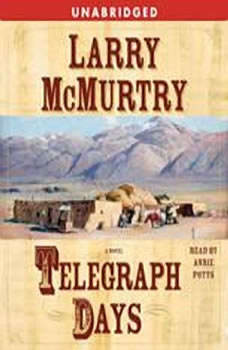 Academy Award-winner Larry McMurtry offers his most ambitious Western novel since Lonesome Dove Nobody writes better about the West than Larry McMurtry, and in Telegraph Days he offers the big novel of Western gunfighters that people have been hoping for years he would write. When Nellie Courtright and her brother Jackson are unexpectedly orphaned by their father's suicide, they make their way to the nearby town of Rita Blanca. Once there, Jackson manages to secure a job as a sheriff's deputy, while the ever resourceful Nellie becomes the town's telegrapher. Together, they inadvertently put Rita Blanca on the map when young Jackson succeeds in shooting down all six of the ferocious Yazee brothers in a gunfight that brings him lifelong fame but which he can never repeat because his success came purely out of luck. Nellie almost conquers the heart of Buffalo Bill, the man she will love most in her long life, and goes to meet, and witness the exploits of Billy the Kid, the Earp brothers, and Doc Holliday.