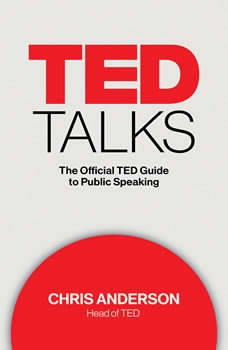 "Catnip for all the TED fans out there." —Publishers Weekly"Unimpeachably practical . . . A handy guide for novice and moderately experienced speakers." —Kirkus Reviews"Anderson shares the secrets behind the best TED presentations." —BooklistSince taking over TED in 2001, Chris Anderson has shown how carefully crafted talks can be the key to unlocking empathy, spreading knowledge, and promoting a shared dream. Done right, a talk can electrify a room and transform an audience’s worldview; it can be more powerful than anything in written form.This “invaluable guide” (Publishers Weekly) explains how the miracle of powerful public speaking is achieved, and equips you to give it your best shot. There is no set formula, but there are tools that can empower any speaker.Chris Anderson has worked with all the TED speakers who have inspired us the most, and here he shares insights from such favorites as Sir Ken Robinson, Salman Khan, Monica Lewinsky and more — everything from how to craft your talk’s content to how you can be most effective on stage. This is a must-read for anyone who is ready to create impact with their ideas.

Instant Communication Skills
by The INSTANT-Series

How to Improve Communications Skills Instantly!Are you having trouble being heard or problem being misunderstood?Nowadays, it's more mandatory than ever to have good communication skill!Do you find it hard to talk to people, or when you do, you don'...

Ideas are the currency of the twenty-first century. In order to succeed, you need to be able to sell your ideas persuasively. This ability is the single greatest skill that will help you accomplish your dreams. Many people have a fear of public spea...

The Storyteller's Secret
by Carmine Gallo

How did a Venice Beach T-shirt vendor become television's most successful producer? How did an entrepreneur who started in a garage create the most iconic product launches in business history? How did a timid pastor's son overcome a paralyzing fear ...

Scared Speechless is coauthored by talent rep and 2015 Oscar® publicist Steve Rohr and Dr. Shirley Impellizzeri, a clinical psychologist who has appeared on The Doctors, Hollywood Exes, Workout, and Dr. Drew.It really is true: What you say and ...

Discover the blueprint to connect with any audience! Need to speak and make a great impression? If you want to go from fearful to confident, and average to outstanding, then this is the book that will take you to a standing ovation. Acclaimed...

How to Analyze People: The Ultimate Guide On Speed Reading People, Analysis Of Body Language, Personality Types And Human Psychology; Learn How To Understand Behaviour And Read Peoples Minds
by Adam Brown

Learning how to analyze people and their personalities can do wonders for your relationships. Whether it’s your coworker, your significant, your family, or even a complete stranger, you will always know exactly how to respond in the best possi...

Own The Room
by Amy Jen Sue

People are drawn to, and influenced by, leaders who communicate authentically, connect with people, and have immediate impact. So how do you become one? How can you learn to "own the room?" This book will help you develop your leadership presence. ...

Meetings That Get Results
by Brian Tracy

Meetings don't have to be a waste of time. When managed right, they are a powerful tool for solving problems, making decisions, exchanging ideas--and getting results fast. Based on years of experience consulting for companies around the world, Brian...

Dale Carnegie, author of the legendary How to Win Friends and Influence People, began his career as the premier "life coach" of the twentieth century by teaching the art of public speaking. Public speaking, as Carnegie saw it, is a vital skill that ...