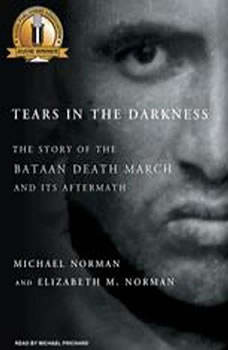 Tears in the Darkness: The Story of the Bataan Death March and Its Aftermath

For the first four months of 1942, U.S., Filipino, and Japanese soldiers fought what was America's first major land battle of World War II, the battle for the tiny Philippine peninsula of Bataan. It ended with the surrender of 76,000 Filipinos and Americans, the single largest defeat in American military history. The defeat, though, was only the beginning, as Michael and Elizabeth M. Norman make dramatically clear in this powerfully original book. From then until the Japanese surrendered in August 1945, the prisoners of war suffered an ordeal of unparalleled cruelty and savagery: forty-one months of captivity, starvation rations, dehydration, hard labor, deadly disease, and torture—far from the machinations of General Douglas MacArthur. The Normans bring to the story remarkable feats of reportage and literary empathy. Their protagonist, Ben Steele, is a figure out of Hemingway: a young cowboy turned sketch artist from Montana who joined the army to see the world. Juxtaposed against Steele's story and the sobering tale of the Death March and its aftermath is the story of a number of Japanese soldiers. The result is an altogether new and original World War II book: it exposes the myths of military heroism as shallow and inadequate; and it makes clear, with great literary and human power, that war causes suffering for people on all sides.