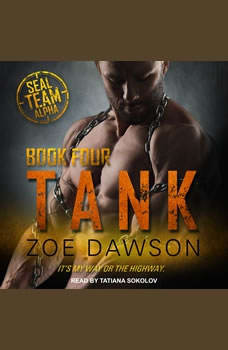 US Navy SEAL Thorn "Tank" Hunt has been there done that, but when he loses his best friend and military working dog Echo, he's heartbroken, but he has to pick up the pieces and get another partner. He met tough as nails and way too confident for her britches, Army Reserve veterinarian, Dr. Alyssa St. James through his baby brother and her fundraising efforts on behalf of MWDs. The undeniably beautiful, but contrary woman takes on the mission to teach Tank some new tricks and in the process, discover that maybe every once and a while he could roll over and let someone else take the lead. Doc, as Alyssa is affectionately known at her practice, has had to deal with plenty of macho assholes in her years as a reservist, but although Tank looks like one of them guys, he's anything but. A big man with a big heart tears down her walls and barriers, except, getting involved with a military man like her jerky ex-husband seems counter-intuitive. The distance and the separation devastated their marriage. Determined to stay in control, she's compelled to help him when he is introduced to Bronte, a beautiful Belgian Malinois to replace the one lost in battle. Just as much a warrior as the man she is finding irresistible. But as their relationship progresses and Tank works himself deeper into her heart, can they take the hardships of serving their country in stride and make it work? Contains mature themes.