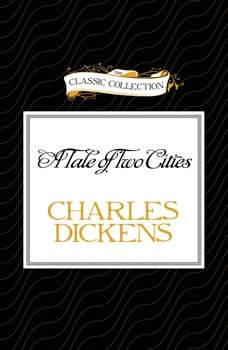 Tale of Two Cities, A

"It is a far, far better thing that I do, than I have ever done; it is a far, far better rest that I go to than I have ever known."From the author of David Copperfield and A Christmas Carol comes a novel which is among the most celebrated works in the history of literary fiction.Dickens' two cities are London and Paris during the time of the French Revolution. Dr. Manette, a French physician, having been called in to treat a young peasant and his sister, realizes that they have been cruelly abused by the Marquis de St. Evremonde and his brother. To ensure Dr. Manette's silence, the Marquis has him confined for eighteen years in the Bastille. As the story opens, the doctor has just been released. He is brought to England where he gradually recovers his health and his sanity.Charles Darnay, concealing his identity as the cruel Marquis' nephew, has left France and renounced his heritage. He falls in love with Lucie, Dr. Manette's daughter, and they are happily married. When he is called to Paris to save a servant condemned by the mob, Darnay himself is imprisoned, setting off a chain of events which will entwine the lives of Darnay and the degenerate barrister Sydney Carton in ways that reveal the profound effects of revenge, love, and redemption.This novel is part of Brilliance Audio's extensive Classic Collection, bringing you timeless masterpieces that you and your family are sure to love.