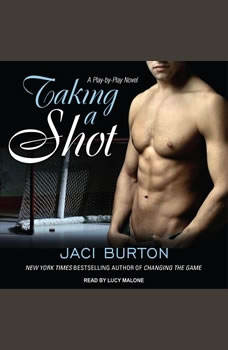 The last thing Jenna Riley needs is more sports in her life. While her brothers are off being athletic superstars, she's stuck running the family's sports bar, whether she likes it or not. Then, in walks pro hockey stud Tyler Anderson. As much as Jenna would like to go to the boards with him, she's vowed to never fall for a jock—even one as hot as Ty.Ty, intrigued by the beautiful bar owner, becomes a regular. He senses that Jenna wants to do something more with her life. And as he gains her trust, the passion between them grows, as does Ty's insistence that Jenna should start living for herself. With his encouragement, Jenna starts to believe it, too.But first, Jenna has to figure out what she wants, what she needs, who she loves, and if she has the passion and pride to take a shot at having it all—including Ty.

Taking a Shot
Play by Play #3

The Perfect Play
Play by Play #1

Changing the Game
Play by Play #2