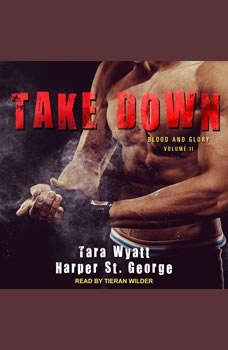 MMA champion Gabriel "The Sandman" Maddox prefers to live his life quietly and intensely. He plays by the rules, respects the sport, and trains harder than any other fighter. It's this unwavering focus that helps him block out the pain from a devastating loss in his past. He spends his days slaying his monsters in the octagon, and his evenings numbing himself with sexual conquests. With his painful baggage, he's not looking for anything beyond his no-strings-attached lifestyle. But journalist Megan Sinclair won't leave him alone. She's intensely drawn to Gabe from the moment she meets him, and wants to know more about the secretive man who both intrigues her and makes her heart race. As she gets to know the quiet, brooding fighter, she realizes that giving in to their intense chemistry could mend her scars. Will these two be able to heal each other, or will ghosts from the past keep them apart? Contains mature themes.

Take Down
Blood and Glory #2

No Contest
Blood and Glory #3