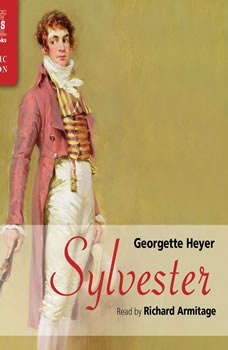 When Sylvester, the Duke of Salford, first meets Phoebe Marlow, he finds her dull and insipid. She finds him insufferably arrogant. But when a series of unforeseen events leads them to be stranded together in a lonely country inn, they are both forced to reassess their hastily formed opinions, and begin a new-found liking and respect for each other. Sylvester calls to mind the satirical genius of a Jane Austen novel and is adored for its wit and a fast-paced plot that ranges across a myriad of settings.

Once Abrielle was a proud, exceptional lady coveted for her bearing, her breeding, her wit, and her beauty. But when her stepfather is denied his rightful title and the wealth that accompanies it, Abrielle finds herself suddenly disgraced. Only one...

Cotillion, one of the most popular historical novels by Regency romance expert Georgette Heyer, is presented in Naxos AudioBooks style, with classical music enhancing the production. Kitty Charing comes to London from the country to find a husband ...