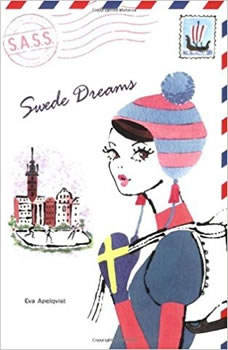 Swede escape! Calista Swanson has begun her study abroad semester in Stockholm, Sweden, and she couldn’t be happier! There’s finally some distance between her and the constant piano-playing of her annoying sister Suzanne. Calista and Suzanne are twins, but the only thing they have in common is their birth date. Suzanne is a focused and gifted pianist, but a social dud. Calista isn’t at all focused, but she always has her friends, and a boyfriend, by her side. And that goes for her time in Sweden, as well. Jonas, who’d been an exchange student at her high school in Wisconsin, lives in Stockholm. He’s the main reason Calista is studying in Sweden, and she knows he’ll be in tow as she explores everything Sweden has to offer, from visiting Swedish castles to learning more about the Viking era, to sampling treats from a smörgåsbord, to strolling the cobblestone streets of Stockholm’s Gamla Stan. Calista loves Sweden from the moment she arrives, but . . . why hasn’t Jonas called?

Pamela L. Laskin’s beautiful and lyrical novel in verse delivers a fresh and captivating retelling of Shakespeare’s Romeo and Juliet that transports the star-crossed lovers to the modern-day Israel-Palestine conflict.Ronit, an Israeli g...

Welcome to the world of the fabulously wealthy in London, 1909, where dresses and houses are overwhelmingly opulent, social class means everything, and women are taught to be nothing more than wives and mothers. Into this world comes seventeen-year-...

Get 5% off your total order by adding 3 or more audiobooks from S.A.S.S.

When Irish Guys Are Smiling
S.A.S.S.