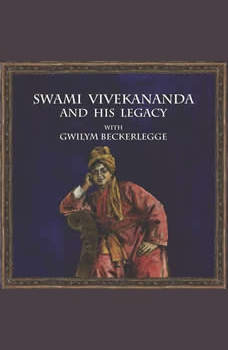 Swami Vivekananda and his legacy with Gwilym Beckerlegge

In this 5 part lecture series Gwilym Beckerlegge discusses the life and legacy of Swami Vivekananda (1863-1902), the Hindu teacher who was arguably the first 'global guru'. Vivekananda has been influential in shaping, among other things, Hindu notions of social activism, and what has come to be known as Modern Yoga, which is now practised beyond India. Gwilym covers the influence of Vivekananda's own guru, the widely revered Sri Ramakrishna, Vivekananda's fascinating journey from India to the United States and Europe at the turn of the 20th century, and the institutions Vivekananda started in Ramakrishna's name.

Vivekananda has been a highly influential but contentious figure in the history of recent Hindu tradition. These lectures will explore aspects of Vivekananda’s legacy with particular reference to the Ramakrishna Math and Mission, the movement Vivekananda founded in his guru's name, and the Vivekananda Kendra, also inspired by Vivekananda, which came into existence in 1972. The Kendra, however, promotes in Vivekananda’s name an ideology strongly influenced by Hindu nationalism. Through an examination of these two movements, the lecture will illustrate the diffuse and durable nature of Vivekananda’s influence, and in the process explain why Vivekananda has been judged by some to have been a contradictory and controversial figure.

The Srimad Bhagavad Gita in English r...
by Tavamithram Sarvada

The Philosophy of the Yoga Sutra with...
by Karen O'Brien-Kop

The Bhagavad Gita
by Edward Viljoen