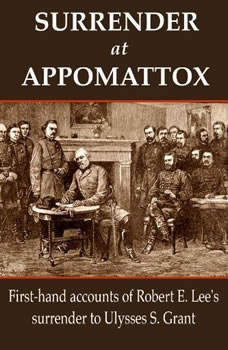 On the 12th of April 1865, the Army of Northern Virginia marched to the field in front of Appomattox Court-House, stacked their arms, folded their colors, and walked off empty handed to find their distant, blighted homes. These are detailed and moving first-hand accounts from a number of prominent witnesses to Robert E. Lee's surrender of the Army of Northern Virginia at Appomattox. Listen to accounts from: Major-General Wesley Merritt, USA Major-General John Gibbon, USA Colonel Charles Marshall, Aide-de-Camp and Military Secretary to General R. E. Lee Brigadier-General E. P. Alexander, CSA Lt. General James Longstreet, CSA General Phil Sheridan, USA Lt. General Ulysses S. Grant Brilliantly narrated in Northern and Southern accets by a professional actor and gifted voice talent, this unique audiobook vividly brings to life the words and heartfelt sentiments of those who wrote these riveting accounts. Also included is the "famous telegram" that informed President Lincoln of Lee's surrender.