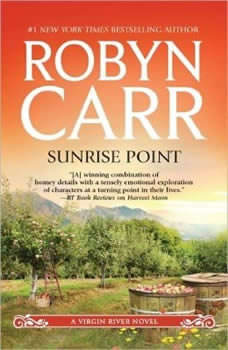 RITA Award winner Robyn Carr is a New York Times and USA Today best-selling author. In this 19th installment of her Virgin River series, Tom Cavanaugh returns home to take over his family’s apple orchard and settle down. Single mom Nora Crane is nothing like the kind of woman he thought he’d fall for—yet he can’t take his eyes off her. And while they have different concepts about family, they soon find out how quickly those ideas can change.

The Newcomer
by Robyn Carr

Single dad and Thunder Point's deputy sheriff "Mac" McCain has worked hard to keep his town safe and his daughter happy. Now he's found his own happiness with Gina James. The longtime friends have always shared the challenges and rewards of raising ...

After nearly a decade as a sous-chef in a trendy eatery, and fresh off a divorce from the owner, Jenna Stevens is desperate for a change. So when she spots a for-lease sign in her hometown, she impulsively decides to open her very own cooking store....

Summer in Sonoma
by Robyn Carr

1105 Yakima Street,Cedar Cove, WashingtonDear Listener,You’ve probably heard that my wife has left me. Rachel’s pregnant, and she says she can’t handle the stress in our household anymore. My thirteen-year-old daughter, Jolene, is ...

Tis the Season
by Robyn Carr

Together for the first time in one volume, two classic holiday storiesplus a bonus novella!from #1 New York Times bestselling author Robyn Carr. 'Tis the season for family, friendship and the thrill of a holiday romance Under the Christmas Tree: Wit...

My Kind of Christmas
by Robyn Carr

RITA recipient Robyn Carr is the #1 New York Times best-selling author of the wildly popular Virgin River books. The 20th in the series, My Kind of Christmas follows Patrick, the youngest Riordan brother, as he recovers from a tragic loss. After his...