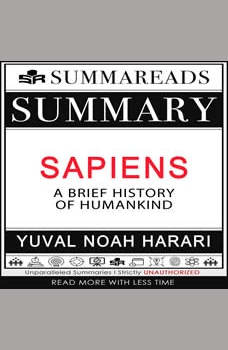 Summary of Sapiens: A Brief History of Humankind by Yuval Noah Harari

Imagine Another Species of Human Standing Right In Front of You…

Did you know that we are called Homo Sapiens…

… and there were many more species of human in the past?

Ever wondered why we own Earth as we know it today?

We’re not the best swimmer, runner & we can’t even fly.

When did we begin to learn how to speak?

When did we begin to believe in religion?

What ACTUALLY happened to us?

Sapiens is written by Yuval Noah Harari and first published in 2011. Since publication, it has been highly acclaimed and heavily criticized at the same time. Afterall, we’re going back 70,000 years ago.

--- Chapter 5: Why the Agricultural Revolution Wasn’t the Book We Think It Was

--- Chapter 7: An Impossible Amount of Numeric Data (and what we did)

--- Chapter 10: Money: A Universal Truth (since when was money created and why?)

--- Chapter 15: The Evolution of Science Through Empire

If you’re ready to learn more about the history of humans and understand more of why things are the way they are, click on the BUY NOW button and start reading this summary book NOW!