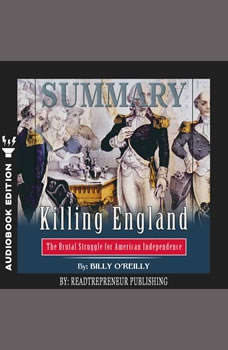 Summary of Killing England: The Brutal Struggle for American Independence by Bill O'Reilly

Killing England: The Brutal Struggle for American Independence by Bill O'Reilly - Book Summary - Readtrepreneur(Disclaimer: This is NOT the original book, but an unofficial summary.)Take a trip back to the most important era in America's history Killing England gives us a crude look of the Revolutionary War. Leaving no details behind, Bill O'Reilly takes us to the battlefield and also to the royal courts of Europe leaving nothing to the imagination.(Note: This summary is wholly written and published by Readtrepreneur It is not affiliated with the original author in any way)"Unlike the British, they don't have cannons that can kill and maim dozens with a single blast of a canister shot." - Bill O'ReillyKilling England has one of the most important factors of an historic book, recreation. The sceneries, the battles, the tense environment, all about the revolutionary war is brilliantly described in the book. The book is definitely a must for someone who wants to increase their knowledge about the nation's history. From Bunker Hill to Yorktown, every important detail of this historic event is covered thoroughly by Bill O'Reilly.P.S. Killing England is an extremely entertaining book which will teach you a lot about the events that molded today's nation.

Summary of The 10X Rule: The Only Difference Between Success and Failure by Grant Cardone
by Readtrepreneur Publishing

?The 10X Rule: The Only Difference Between Success and Failure by Grant Cardone - Book Summary - Readtrepreneur(Disclaimer: This is NOT the original book, but an unofficial summary.)Have you ever wondered how some people became so Successful? The Wo...

Fatal Forecast chronicles a dramatic fight for survival aboard two small fishing boats that were caught in a horrific surprise storm off of Cape Cod. Soon after the Fair Wind and the Sea Fever reached the fishing ground at Georges Bank, they were h...

Summary of Braving the Wilderness: The Quest for True Belonging and the Courage to Stand Alone by Brene Brown
by Readtrepreneur Publishing

Braving the Wilderness: The Quest for True Belonging and the Courage to Stand Alone by Brene Brown Book Summary Readtrepreneur(Disclaimer: This is NOT the original book, but an unofficial summary.)In an era where we are continuously feeling disconne...

In the early nineteenth century, many Americans were looking for an alternative to the Puritanism that had been the foundation of the new country. Amid the fervor of the religious revival known as the Second Great Awakening, John Humphrey Noyes, a s...