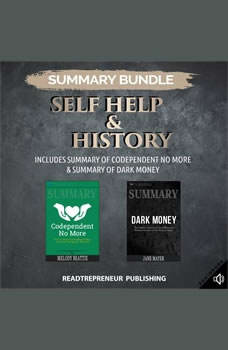 From the Description of “Summary of Codependent No More”…?

A book that has influenced over a million people and has helped them improve as human beings, Codependent No More is so effective that is increasingly being "prescribed" by mental health professionals for different patients with different types of relationships. Melody Beattie's Codependent No More was the foundation for her new twelve step program called "Co-dependents Anonymous" to focus further on the issue and give even more alternatives to help you be happier.

From the Description of “Summary of Dark Money”…

"Without the rigorous peer-reviewed standards previewed by prestigious academic publications, the Olin Foundation was able to inject into the mainstream a number of works whose scholarship was debatable at best." – Jane Mayer

In Dark Money, Jane Mayer debunks a common belief about the reason behind the economic and political state of the country. With a large amount of evidence, she showed how a network of incredibly wealthy people played a big role on bending the American political system to their will. At the end of the book, you will learn a large array of things you thought you knew and learn so much about politics and economics along the way.

What if you could learn 3X more in 2X less time? How much faster could you accelerate to reach your goals? Start accelerating your growth today by adding this book to your shopping cart now or clicking on the buy now button.

How to Break Your Addiction to a Pers...
by PhD Halpern

Women Who Love Too Much
by Robin Norwood

You're Not Crazy - You're Codependent...
by Jeanette Elisabeth Menter

Overcome Anxiety: Rewire Your Brain U...
by Lilly Andrew

Addiction to Love
by Susan Peabody

Out of the Fog
by Dana Morningstar