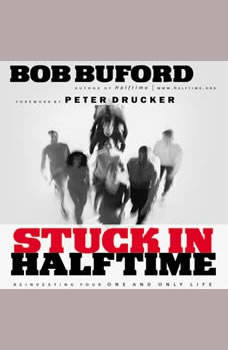 Stuck in Halftime: Reinvesting Your One and Only Life

Since the release of Halftime in 1994, more than 150,000 people have purchased the book and begun a journey from success to significance. In a way that no one could have predicted, this book has started a widespread movement that views midlife as an opportunity rather than a crisis. It helped men and women between the ages of 35-50 realize that they have at least another thirty years of active, vibrant living ahead of them and that retirement is not the optimal option. But now, readers feel stuck. More than eighty percent of people who began the journey got sidetracked. Now they want to know how to get a€œunstuck.a€ Stuck in Halftime is written for the person who is trying to successfully make it through the midlife journey of a€œhalf time.a€ It shows readers how to get past the barriers that stand in the way. It outlines eight a€œmyths of half timea€ that distract people trying to move from success to significance. It also explains the new rules of this journey, since the old rules of the first half do not work anymore. And it uses stories of those who were stuck in a similar way to illustrate ways to become unstuck. This book is of enormous help to those who heard the a€œstill, small voice of Goda€ calling them to a life of significance. It is a book of encouragement, hope, and practical guidance.

Fear Is Not the Boss of You
by Jennifer Allwood

The Generosity Factor
by Ken Blanchard

The Way of the Shepherd
by Kevin Leman

Success from the Inside Out
by Nona Jones

Master of One
by Jordan Raynor

Do More Better
by Tim Challies