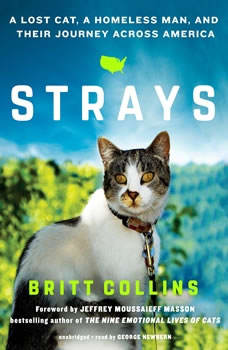 Strays: A Lost Cat, a Homeless Man, and Their Journey across America

For fans of A Street Cat Named Bob and Dewey: The Small-Town Library Cat Who Touched the World, Strays is a compelling true story of a man who rescues a stray, injured cat and how they save each other. Homeless, alcoholic, and depressed, Michael King lives in a UPS loading bay on the wrong side of the tracks in Portland, Oregon. One rainy night, he stumbles upon a hurt, starving, scruffy cat and takes her in. Nursing her back to health, he names her Tabor, and she becomes a bit of a celebrity in southeast Portland. When winter comes, they travel from Oregon to the beaches of California and to the high plains of Montana, surviving blizzards and bears, angry steers and rainstorms. Along the way, people are drawn to the spirited, beautiful cat and moved to help Michael, who cuts a striking figure with Tabor riding high on his backpack or walking on a leash. Tabor comforts Michael when hes down, giving Michael someone to love and care for, and inspiring him to get sober and to come to terms with his past family traumas and grief over the death of his life partner. As they make their way across the West Coast, the pair become inseparable, healing the scars of each others troubled pasts. But when Michael takes Tabor to a veterinarian in Montana, he discovers that Tabor has an identification chip and an owner in Portland who has never given up hope of finding his beloved cat. Michael makes the difficult choice to return to Portland and reunite Tabor with her owner. Now Michael must create a new purpose in his life after Tabor.The authentic tale of an adventurous and charismatic cat and her compassionate human admirers, Strays proves the healing power of love and the profound bond between humans and animals.

Trainable Cat, The
by John Bradshaw

The Lion in the Living Room
by Abigail Tucker

For the Love of a Dog
by Ph.D. McConnell

Tiny But Mighty
by Hannah Shaw

The Inner Life of Cats
by Thomas McNamee