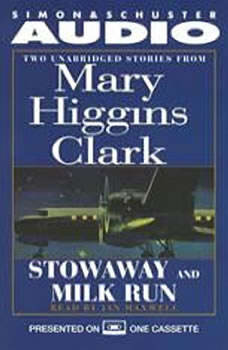 Mary Higgins Clark is a master storyteller, who keeps hr readers spellbound. Now, in her first two published stories, written in the fifties, she draws on her career as a young Pan American Airway-flight attendant to create these tales of adventure and intrigue. In Stowaway, a courageous flight attendant helps a dsperate young man of the underground escape the Soviet police. In Milkrun, a flight attendant becomes immersed in a web of deception when she serves as a courier of an important documetn -- only to find it's been stolen during the flight. Stowaway and Milkrun are two edge-of-your-seat classics that could only come from Mary Higgins Clark.