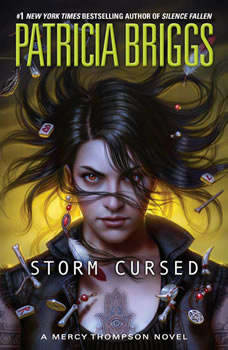 In this powerful entry in the #1 New York Times bestselling series, Mercy Thompson must face a deadly enemy to defend all she loves…

My name is Mercedes Athena Thompson Hauptman, and I am a car mechanic.

And a coyote shapeshifter.

And the mate of the Alpha of the Columbia Basin werewolf pack.

Even so, none of that would have gotten me into trouble if, a few months ago, I hadn’t stood upon a bridge and taken responsibility for the safety of the citizens who lived in our territory. It seemed like the thing to do at the time. It should have only involved hunting down killer goblins, zombie goats, and an occasional troll. Instead, our home was viewed as neutral ground, a place where humans would feel safe to come and treat with the fae.

The reality is that nothing and no one is safe.  As generals and politicians face off with the Gray Lords of the fae, a storm is coming and her name is Death.

But we are pack, and we have given our word.

We will die to keep it.

Now Briggs begins an extraordinary new series set in Mercy Thompson’s world—but with rules of its own. INTRODUCING THE ALPHA AND OMEGA NOVELS... Anna never knew werewolves existed until the night she survived a violent attack…and ...

In a world where "witches, vampires, werewolves, and shape-shifters live beside ordinary people" (Booklist), it takes a very unusual woman to call it home. By day, Mercy Thompson is a car mechanic in Eastern Washington. By night, she explores ...

In the #1 New York Times bestselling Mercy Thompson novels, the coyote shapeshifter has found her voice in the werewolf pack. But when Mercy’s bond with the pack—and her mate—is broken, she’ll learn what it truly means to be ...

Mercy Thompson has been hailed as “a heroine who continues to grow and yet always remains true to herself.”* Now she’s back, and she’ll soon discover that when the fae stalk the human world, it’s the children who suffer...