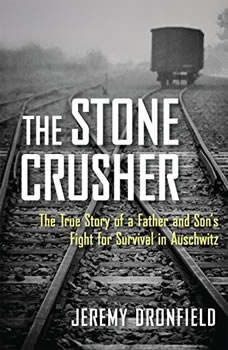 Stone Crusher, The: The True Story of a Father and Son's Fight for Survival in Auschwitz

In 1939, Gustav Kleinmann, a Jewish upholsterer in Vienna, was arrested by the Nazis. Along with his 16-year old son Fritz, he was sent to Buchenwald in Germany, where a new concentration camp was being built. It was the beginning of a five-year odyssey almost without parallel. They helped build Buchenwald, young Fritz learning construction skills which would help preserve him from extermination in the coming years. But it was his bond with his father that would ultimately keep them both alive. When the 50-year old Gustav was transferred to Auschwitz—a certain death sentence—Fritz was determined to go with him. His wiser friends tried to dissuade him—“If you want to keep living, you have to forget your father,” they said. But that was impossible, and Fritz pleaded for a place on the Auschwitz transport. “He is a true comrade,” Gustav wrote in his secret diary, “always at my side. The boy is my greatest joy. We are inseparable.” Gustav kept his diary hidden throughout his six years in the death camps—even Fritz knew nothing of it. In it he recorded his story, a tale of survival and a father-son bond which proved stronger than the machine that sought to break them both.