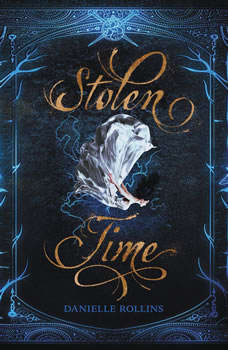 “Endearing, exciting, and very clever, Danielle Rollins' Stolen Time is the kind of time-travel story I'm always on the lookout for. I know I can't really speak for him, but I feel like Doc Brown would be onboard with this one.”—Kendare Blake, #1 New York Times bestselling author of the Three Dark Crowns series“The hauntingly evocative prose seduced me, the compellingly nuanced characters captivated me, and the twisting storyline ensnared my thoughts in an infinite spiral that refused to release me until the final word.”—Romina Russell, New York Times bestselling author of the Zodiac seriesSeattle, 1913Dorothy spent her life learning the art of the con. But after meeting a stranger and stowing away on his peculiar aircraft, she wakes up in a chilling version of the world she left behind—and for the first time in her life, realizes she’s in way over her head. New Seattle, 2077If there was ever a girl who was trouble, it was one who snuck on board Ash’s time machine wearing a wedding gown—and the last thing he needs is trouble if he wants to prevent his terrifying visions of the future from coming true.

All Our Yesterdays
by Cristin Terrill

"You have to kill him." Imprisoned in the heart of a secret military base, Em has nothing except the voice of the boy in the cell next door and the list of instructions she finds taped inside the drain. Only Em can complete the final instruction. S...

Time Between Us
by Tamara Ireland Stone

Anna and Bennett were never supposed to meet: she lives in 1995 Chicago and he lives in 2012 San Francisco. But Bennett has the unique ability to travel through time and space, which brings him into Anna’s life, and with him a new world of adv...

Fast-paced, enormously cinematic, and full of inventive world-building, diverse characters, and moral complexity, Stranger is speculative fiction and its best-and its most true to our lives.Many generations ago, a mysterious cataclysm struck the wor...

Riley, a teen orphan boy living in Victorian London, has had the misfortune of being apprenticed to Albert Garrick, an illusionist who has fallen on difficult times and now uses his unique conjuring skills to gain access to victims' d...

The Here and Now
by Ann Brashares

From the #1 New York Times bestselling author of the Sisterhood of the Traveling Pants series, The Here and Now is an epic star-crossed romance about a girl who might be able to save the world . . . if she lets go of the one thin...

The holograms lied to everyone on Earth, and only Alexandra Lucas knows the truth. Now shes trapped in the year 2359 without family or friendsand worse, without her anxiety medication. Alex attempts to reconcile the marvelous scenery, technological...

Gimme A Call
by Sarah Mlynowski

“A warm, wonderful (and hilarious!) story about learning to be your own hero. I h this book like crazy!!!!” —Lauren Myracle, author of Peace, Love and Baby Ducks Devi’s life isn’t turning out at all like she wanted...

Martin Conway comes from a family filled with heroes and disgraces. His grandfather was a statesman who worked at the US Embassy in London during WWII. His father is an alcoholic who left his family. His sister is an overachieving Ivy League graduat...