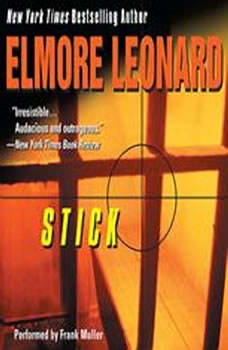 “A little beauty of a story….A hot, fast read with pungent characters.” —Los Angeles Times“A slam-bang, no-bull action thriller…and nobody but nobody writes better dialogue.” —New York Daily NewsIt’s an established fact: Elmore Leonard is “the uncontested master of the crime thriller” (Washington Post ) who “does crime fiction better than anyone” (Cleveland Plain Dealer), and nowhere is this more obvious than in the pages of Stick. One of his most acclaimed noir masterworks, it is the story of ex-con Ernest “Stick” Stickley who’s nudged from the straight-and-narrow path when a big time drug dealer randomly selects him to die and a perfect revenge/payday opportunity presents itself. The author of Raylan, featuring  U.S. Marshal Raylan Givens, the sometimes trigger-happy protagonist of TV’s Justified, Leonard is indeed the king, holding court with the best of the best, including Coban and Connally, and the late great John D. MacDonald, Dashiell Hammett, James M. Cain, and Robert B. Parker.