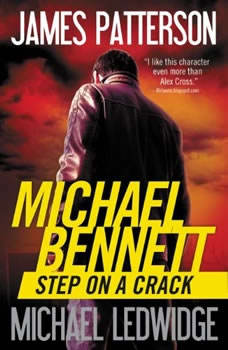 Step on a Crack - Booktrack Edition

Step On A Crack: Booktrack Edition adds an immersive musical soundtrack to your audiobook listening experience!* NYPD Detective Michael Bennett is about to take on the most sinister challenge of his career. The nation has fallen into mourning after the unexpected death of a beloved former first lady, and the most powerful people in the world gather in New York for her funeral. Then the inconceivable occurs. Billionaires, politicians, and superstars of every kind are suddenly trapped within one man's brilliant and cold-blooded scenario.Bennett, father of 10, is pulled into the fray. As the danger escalates, he is hit with devastating news: after fighting for many years, his wife has succumbed to a terrible disease. As New York descends into chaos, he has lost the great love of his life, faces raising his heartbroken children alone, and must somehow rescue 34 hostages.Day after day, Bennett confronts the most ruthless man he has ever dealt with, a man who kills without hesitation and counters everything the NYPD and FBI throw at him with impunity. As the entire world watches, and the tensions build to a searing heat, Bennett has to find a way out or face responsibility for the greatest debacle in history.*Booktrack is an immersive format that pairs traditional audiobook narration to complementary music. The tempo and rhythm of the score are in perfect harmony with the action and characters throughout the audiobook. Gently playing in the background, the music never overpowers or distracts from the narration so that listeners can enjoy every minute. When you purchase this Booktrack edition, you receive the exact narration as the traditional audiobook available, with the addition of music throughout.