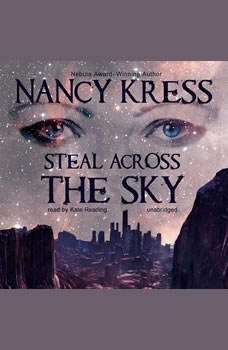 Steal across the Sky

The aliens appeared one day, built a base on the moon, and put an ad on the Internet: “We are an alien race you may call the Atoners. Ten thousand years ago we wronged humanity profoundly. We cannot undo what has been done, but we wish humanity to understand it. Therefore we request twenty-one volunteers to visit seven planets to witness for us. We will convey each volunteer there and back in complete safety. Volunteers must speak English. Send requests for electronic applications to witness@atoners.com.” At first, everyone thought it was a joke. But it wasn’t. This is the story of three of those volunteers and what they found on Kular A and Kular B. A 2010 Locus Award Nominee.