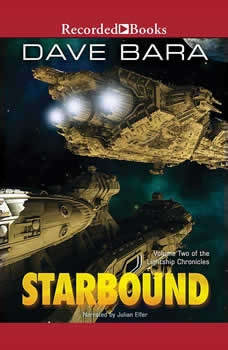 The Lightship H.M.S. Impulse is gone, sacrificed in a battle against First Empire ships. And though the fragile galactic alliance has survived the unexpected invasion, the Union forces might not prove victorious against a full onslaught by this legendary enemy. For Peter Cochrane, serving as an officer aboard his world's flagship, H.M.S. Starbound is a dream come true. Tasked with investigating a mysterious space station in a rediscovered star system, Peter and Starbound face a surprise attack by unknown forces and suffer terrible losses. But there is no time to grieve or even regroup as Peter is thrust into a new crisis, a potential civil war on the Union world of Carinthia. Caught between his rank in the navy and his status as a royal heir, Peter is put on trial for the loss of Impulse, used as a political pawn as Carinthia stands on the brink of a devastating conflict. Peter escapes but faces the prospect of interstellar war when he learns of a possible alliance between the First Empire and Carinthia, a coalition which could tear the Union apart!