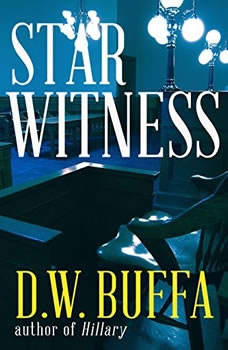 Star Witness is about a man on trial for murder - a man recognized as one of the film industry's most successful writers/directors, a man of almost mythic drive and talent, and someone who looks more guilty with every passing witness. Attorney Joseph Antonelli - suave, philosophical, fearless, and cagey - takes up the director's defense for the murder of his wife, the actress every woman wants to be and every man wants to possess. Despite Antonelli's flawless examination of the prosecution's witnesses, the jury finds fewer and fewer reasons to doubt. Then the director shows Antonelli the script he considers his masterpiece - a re-imagining of Orson Welles's Citizen Kane - with a visionary film director as its hero. In this story-within-a-story, the accused reveals his version of the tragedy - the secrets of his marriage, and the ominous events that led to his wife's death. In it we see the way art can imitate life - and unmask a killer even the court can't find. Star Witness is a breath-taking novel about the nature of fame and the ever-confusing intersection of truth and fantasy, dream and desire.