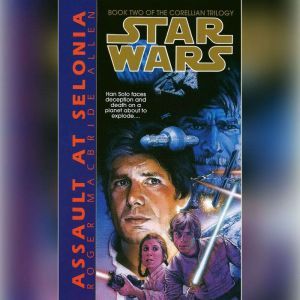 The blockbuster adventures of Star Wars "RM" continue in the second book of the Corellian trilogy...

Imprisoned on the planet Corellia, Han Solo finds himself at the mercy of his "dark side" cousin, Thracken Sal-Solo. Thracken plans to restore the Imperial System and seize total power -- no matter what the cost. Han has one chance to stop him. But to do so he must turn his back on his human cousin and join forces with a female alien. Dracmus was arrested as a ringleader in a plot against the corrupt Human League. Now she and Han will attempt a daring escape to Selonia in time to warn Leia, Luke Skywalker, and Lando of Thracken's plan. But can Hart trust the alien to keep her word?

Meanwhile, other questions threaten the New Republic -- and the lives of millions. Who is behind the deadly Starbuster plot? Why is someone attempting to take possession of Corellia's powerful planetary repulsors? And what is the secret behind the mysterious Centerpoint Station, an ancient artificial world of unknown origin that has suddenly -- and inexplicably -- come alive?