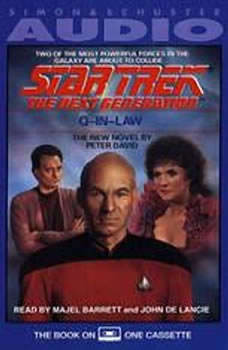 Two powerful rival families of the spacefaring merchant race called the Tizarin are to be joined through marriage, and the U.S.S. EnterpriseTM is chosen as the site for the wedding. Captain Picard is pleased by the happy duty, but his pleasure is cut short by the arrival of the Federation delegate from Betazed, Lwaxana Troi, the mother of ship's counsellor, Deanna Troi.Despite Lwaxana Troi's romantic overtures toward the captain, the celebration seems to go smoothly until the situation is further complicated by the arrival of the notorious and all powerful being called Q, who has come to examine and challenge the human concept of love. The festivities are thrown into turmoil, the powerful Tizarin families are on the verge of war, and Lwaxana Troi is determined to teach Q a lesson in love that he will never forget.