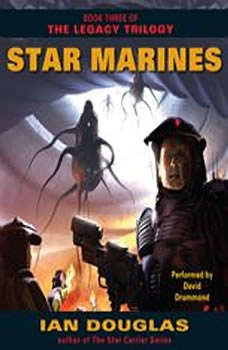 With the planet's fighting men and women deployed across the galaxy—battling in the noble cause of enslaved humanity—the insidious Xul have reached across space to devastate the unsuspecting Earth with asteroid fire. Without warning, a once majestic world is reduced to near-rubble—and the very future of humankind is in dire jeopardy. Interplanetary leaders are on the brink of abandoning Earth and its colonies to an overwhelming enemy. But Brigadier General Garroway of the Marine Interstellar Expeditionary Unit is unwilling to concede defeat—not as long as there's a single marine willing to give his or her life in defense of their embattled homeworld. The ultimate battle is about to be waged—with breathtaking new attack technology, an ancient code of courage, and the help of an ally race that once inhabited the Earth—in a war that will alter the universe forever . . .

Star Marines: Book Three of The Leg...
The Legacy Trilogy #3

Legacy of Ash
The Legacy Trilogy #1