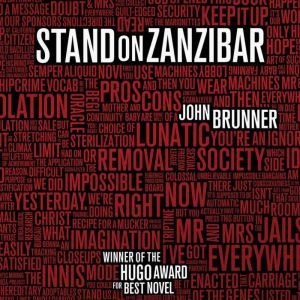 Norman Niblock House is a rising executive at General Technics, one of a few all-powerful corporations. His work is leading General Technics to the forefront of global domination, both in the marketplace and politically---it's about to take over a country in Africa. Donald Hogan is his roommate, a seemingly sheepish bookworm. But Hogan is a spy, and he's about to discover a breakthrough in genetic engineering that will change the world...and kill him. These two men's lives weave through one of science fiction's most praised novels. Written in a way that echoes John Dos Passos' U.S.A. Trilogy, Stand on Zanzibar is a cross-section of a world overpopulated by the billions. Where society is squeezed into hive-living madness by god-like mega computers, mass-marketed psychedelic drugs, and mundane uses of genetic engineering. Though written in 1968, it speaks of 2010, and is frighteningly prescient and intensely powerful.