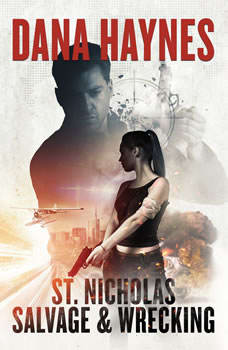 Michael Patrick Finnigan was a New York City cop and a US Marshal who figured out that following the rules doesn't always get the job done. Katalin Fiero Dahar was a soldier, spy, and assassin for Spain, who figured out that breaking the rules doesn't always get the job done. Together, they created St. Nicholas Salvage & Wrecking, a largely illegal bounty hunting operation based in Cyprus and working throughout Europe. Operating under the radar for the presiding judge of the International Criminal Court, they track down the worst of the world's worst. Someone is kidnapping Middle Eastern refugee children as they flee war-torn countries and selling them into prostitution around the world. Finnigan and Fiero get the assignment to track them down and save the refugees. But when they discover that the perpetrators are a Serbian mobster-with patronage at the highest levels of the United Nations-and a battalion of the Kosovo military, the partners reach out to their "friends" to find justice, including a corrupt banker, a cadre of mercenaries, and a crew of professional thieves. The battle to stop the mass kidnappings ranges from Belgrade and Zagreb, to the Loire Valley and Milan, and to the plains of Kosovo. As Finnigan and Fiero close in, the conspirators realize that the judge of the ICC is the real threat and plan an assassination. Now the partners have to save their patron and the kidnapped refugees from a rogue military force with nothing left to lose.