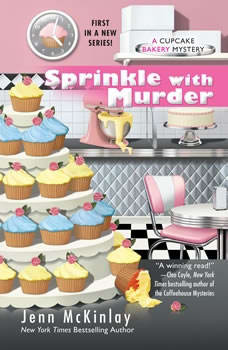 Melanie Cooper and Angie DeLaura are finally living out their dream as the proud owners of the Fairy Tale Cupcakes bakery. But their first big client is a nightmare. She's a bridezilla who wants 500 custom cupcakes for her wedding. When Mel stumbles upon the bride-to-be dead - by cupcake - Mel becomes the prime suspect. To save themselves and their business, the ladies need to find the real murderer, before the cupcake killer ices someone else.

A Killer Plot
by Ellery Adams

Olivia Limoges is the subject of constant gossip. Ever since her mysterious return to the small coastal town of Oyster Bay, North Carolina, Olivia has kept to herself, her dog, and her unfinished novel. With a little cajoling from charming writer Ca...

Lily Ivory hopes for a normal life when she opens Aunt Cora's Closet. With her magical knack for vintage fashion—she can sense vibrations of the past from clothing and jewelry—her store becomes a big hit. But when a client is m...

"The definition of an owl had always pleased him: a night bird of prey...sharp talons and soft plumage which permits noiseless flight...applied figuratively to a person of nocturnal habits. 'I am The Owl,' he would whisper to himself after he had se...

If Walls Could Talk
by Juliet Blackwell

Melanie Turner has made quite a name for herself remodeling historic houses in the San Francisco Bay Area. But now her reputation may be on the line. At her newest project, a run-down Pacific Heights mansion, Mel is visited by the ghost of a collea...

Buttercream Bump Off
by Jenn McKinlay

Melanie Cooper and Angie DeLaura's Fairy Tale Cupcakes bakery is gearing up for Valentine's Day. Unfortunately someone has iced Baxter Malloy on his first date with Mel's mother. Now Mom's a suspect, and Mel and Angie need to find time around fro...

A Cast-Off Coven
by Juliet Blackwell

Students are spooked at the San Francisco School of Fine Arts, and Lily is called in to search for possible paranormal activity. In return she's been promised a trunkful of Victorian-era clothes recently discovered in a school storage closet.But Lil...