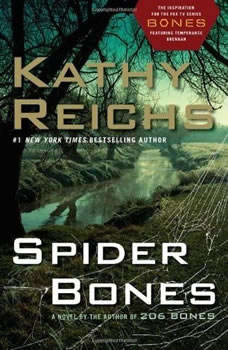 #1 New York Times bestselling author Kathy Reichs, a producer of the Fox television hit Bones , returns with a riveting new novel featuring America’s favorite forensic anthropologist, Tempe Brennan. The New York Times Book Review hailed the Tempe Brennan novels as a “cleverly plotted and expertly maintained series.” Spider Bones opens as Temperance Brennan is called to the scene of a drowning in Hemmingford, Quebec. The victim appears to have died while in the midst of a bizarre sexual practice. The body is identified as a man originally declared dead in 1968—the victim of a Huey crash in Vietnam. Tempe exhumes the soldier’s corpse from his grave in North Carolina and flies with the remains to Hawaii for a reanalysis of the bones. But it’s not long before another set of remains are found with the first victim’s dog tags tangled amongst them. There are now two unidentified bodies—both with strange connections. Meanwhile, the Honolulu medical examiner asks Tempe for help with remains found offshore—from yet another victim. Is it the victim of a shark attack? Or something much more sinister…