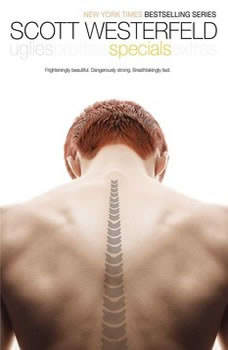 The third installment of Scott Westerfeld’s New York Times bestselling and award-winning Uglies series—a global phenomenon that started the dystopian trend.Tally thought they were a rumor, but now she’s one of them. A Special. A super-amped fighting machine, engineered to keep the uglies down and the pretties stupid. But maybe being perfectly programmed with strength and focus isn’t better than anything she’s ever known. Tally still has memories of something else. Still, it’s easy to tune that out—until she’s offered a chance to stamp out the rebels of the New Smoke permanently. It all comes down to one last choice: listen to that tiny, faint heartbeat, or carry out the mission she’s programmed to complete. Either way, Tally’s world will never be the same.

I loved this whole series. This one really finishes everything off in such an unexpected way. It's not the last book in the series, but it finishes the events that have been happening. So good! A must-read series!