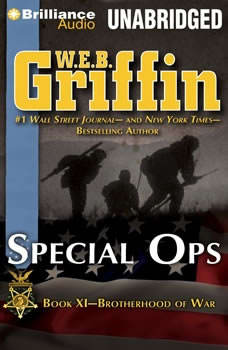 Special Ops: Book Nine of the Brotherhood of War Series

In November 1964, Cuban revolutionary Che Guevara went to the Congo with two hundred men, intent on making it his first step in taking over Africa and South America.He failed, thanks in large part to the efforts of an intrepid band of Green Berets. Licking his wounds, he retreated to Cuba to recruit more men and try the same thing in Bolivia. He failed there, too. In fact, he died there, and thus, despite his incompetence, became a glorious martyr to the cause. But who was trying to kill him, really—and who was trying to keep him alive?The brotherhood is back—Craig Lowell, Sandy Felter, Jack Portet, Geoff Craig, Robert Bellmon, George Washington "Father" Lunsford, Master Sergeant Doubting Thomas—and their mission has never been more dramatic and deadly…“Strongly reminiscent of modern American military classics From Here to Eternity and The Winds of War… An intricately layered, epic novel.” —Publishers Weekly