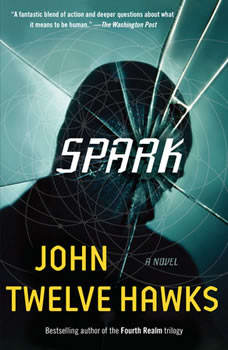 THE MOST DANGEROUS ASSASSIN IS THE ONE WHO BELIEVES HE IS ALREADY DEAD.

A razor-sharp, high-tech, wildly imaginative new novel from internationally bestselling author John Twelve Hawks, Spark features a narrator unlike any in recent fiction—a man whose view of life and death is different from anything you’ve ever imagined.

Jacob Underwood is a contract employee of the Special Services Section, a small shadow department buried within the multinational corporation DBG, headquartered in New York City. Jacob is not a businessman . . . he is a hired assassin . . . and his job is to neutralize problems deemed unacceptable by the corporation. But Jacob is not like other employees, nor is he like other people. After a catastrophic motorcycle accident leaves him with Cotard’s syndrome—an actual condition that causes those afflicted to believe they are dead—Jacob perceives himself as nothing but a “Shell,” with no emotions and no tether to the concept of right and wrong.
Emily Buchanan is a bright  young second-year associate for DBG, and she has disappeared without a trace. Suspecting that Emily has stolen either vast sums of money or valuable information from the company, Ms. Holquist, Jacob’s handler at DBG, assigns him the task of tracking down the young woman and neutralizing her. Jacob’s condition allows him to carry out assignments with ruthless, logical precision, devoid of guilt, fear, or dishonor. But as his new assignment draws him inside a labyrinthine network of dark dealings, Jacob finds himself up against something he is completely incapable of understanding.
Shifting with riveting precision from New York to London, Paris to New Delhi, Spark is a thriller that delves into the surveillance state we prognosticate  today . . . and will live in tomorrow. In the hands of master storyteller John Twelve Hawks, a unique character’s startling transformation comes to life, making Spark a thriller that resonates and satisfies on many levels.