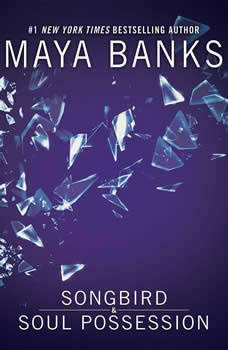 SongbirdThey called her their Songbird, but she was never theirs. Not in the way she wanted.The Donovan brothers meant everything to Emily, but rejected by Greer and Taggert, she turned to Sean, the youngest. He married her for love, and she loved him, but she also loved his older brothers.Her singing launched her to stardom. She had it all. The voice of an angel, a husband who loved her, and the adoration of millions. Until a tragedy took it all away.Taggert and Greer grieve for their younger brother, but they’re also grieving the loss of Emmy, their songbird. They take her back to Montana, determined to help her heal and show her once and for all they want her. They’re also on a mission to help her find her voice again. Under the protective shield of their love, she begins to blossom…until an old threat resurfaces.Now the Donovans face a fight for what they once threw away. Only by winning it—and her love—will their songbird fly again.Soul PossessionNew York Times bestselling author Maya Banks walks the sizzling knife-edge between danger and desire as one woman with a killer in her shadow finds protective rapture with the two men with a need to save her...The hottest thing about a man in uniform is imagining him out of it. For gorgeous Jessie Callahan this was all part of the ritual—a flirty little game indulged in with the two sexy-as-sin detectives she always saw at the same bar with the same naughty little glint in their eyes. Then one night, the game changed. Rick and Tru took it one step further and made a tantalizing proposition. To their surprise, Jessie said yes. To both of them.It was a night of total abandon none of them would ever forget. But with it, a risk none of them could have imagined. Because when Jessie suddenly becomes the target of a serial killer, the game changes once again. And Jessie’s two detectives will risk everything to have her back in their arms—and in their bed...