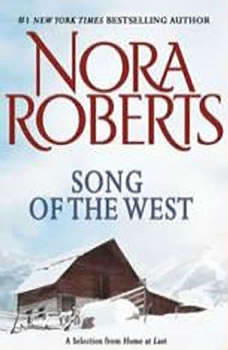 Song of the West: A Selection from Home at Last

#1 New York Times bestselling author Nora Roberts proves that you can’t resist the forces of nature in this heartwarming tale.When her pregnant sister is restricted to bed rest, Samantha Evans leaves the traffic-choked streets of Philadelphia for the majestic mountains and wide-open plains of Wyoming to help her. And while Samantha can appreciate the natural beauty of the land, she has no plans to stay—even if she’s intrigued by Jake Tanner, a wealthy rancher who’s left a trail of broken hearts in his wake.But when a blizzard strands them together, Samantha begins to understand how powerful the pull of the West—and Jake—can be.…