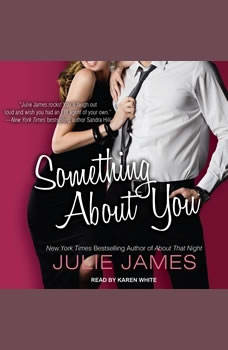 Staying overnight in a luxury hotel, Assistant U.S. Attorney Cameron Lynde overhears a high-profile murder involving a U.S. senator. Special Agent Jack Pallas is assigned to the investigation—the same Jack Pallas who still blames her for nearly ruining his career three years ago. Now the pair will have to put their rocky past behind them, focus on the case at hand—and smother the flame of their sizzling-hot sexual tension.

A fabulously fun, romantic comedy from a dynamic new talent.Nothing fazes Taylor Donovan—not in the courtroom and not in her personal life. So when she’s assigned to coach People's "Sexiest Man Alive" for his role in the next big legal d...

About That Night
by Julie James

Though Rylann Pierce tried to fight the sparks she felt for billionaire heir Kyle Rhodes the night they met, their sizzling chemistry was undeniable. But after being stood up on their first date, Rylann never expected to see him again. So when she f...

Jordan Rhodes is invited to all of Chicago's best parties, but there's only one the FBI wants to crash. To get her brother out of jail, she agrees to take Agent McCall as her date. But when the mission gets botched, requiring their "relationship" to...

Bending the Rules
by Susan Andersen

Something About You
FBI-US Attorney #1

About That Night
FBI-US Attorney #3