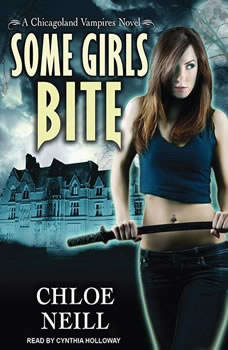 They killed me. They healed me. They changed me. Sure, the life of a graduate student wasn't exactly glamorous, but it was mine. I was doing fine until Chicago's vampires announced their existence to the world—and then a rogue vampire attacked me. But he only got a sip before he was scared away by another bloodsucker...and this one decided that the best way to save my life was to make me the walking undead. Turns out my savior was the master vampire of Cadogan House. Now I've traded sweating over my thesis for learning to fit in at a Hyde Park mansion full of vamps loyal to Ethan "Lord o' the Manor" Sullivan. Of course, as a tall, green-eyed, four-hundred-year-old vampire, he has centuries' worth of charm, but unfortunately he expects my gratitude—and servitude. Right. But my burgeoning powers (all of a sudden, I'm surprisingly handy with some serious weaponry), an inconvenient sunlight allergy, and Ethan's attitude are the least of my concerns. Someone's still out to get me. Is it the rogue vampire who bit me? A vamp from a rival House? An angry mob bearing torches? My initiation into Chicago's nightlife may be the first skirmish in a war—and there will be blood.

One Grave at a Time
by Jeaniene Frost

The grave is one wrong step away. Having narrowly averted an (under)world war, Cat Crawfield wants nothing more than a little downtime with her vampire husband, Bones. Unfortunately, her gift fromNew Orleans voodoo queen just keeps on givingleading...