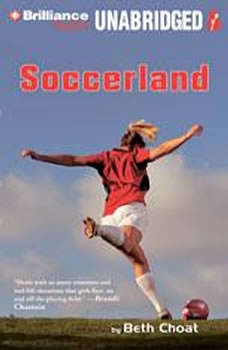 "One day I’m going to play for the U.S. Women’s National Team."That’s what Flora Dupre promised her mom before she died of cancer. Flora and her mom had created a place called Soccerland, an escape world in which they’d ignore the beeping cancer machines and just talk soccer. And now Flora’s dream of playing for the U.S.A. just might be coming true. Flora’s received the invitation of a lifetime: the chance to try out for the Under-15 U.S. Girls’ Soccer Team at the International Sports Academy.But at the academy, the level of talent is like nothing Flora’s ever seen before. She struggles to hold her own as she grapples with new positions, injuries, the world’s most frustrating coach, and contempt from other players who would love to see her fail. But Flora is a big, strong Dupre girl — and she’s not going to go down easy.“Superbly written.” — Doug McIntyre, ESPN The Magazine“Choat’s examination of the dedication, effort, and sacrifice needed to become a national-level player is riveting and inspiring. Readers will be rooting for Flora as she struggles to achieve her goals. — Kirkus Reviews“A dazzling and expert portrait of the life of the young elite athlete.” — S. L. Price, Sports Illustrated

Soccer: The Ultimate Guide to Soccer Rules, Concepts, and Strategy for Beginners
by Larry Nobot

Are you a fan of soccer and want to learn more?Would you like to perfect the skills that top soccer players possess?This audiobook can help you get started!Soccer is played in every country on the planet and is the number one game in most of them, b...

The Berenstain Bears The Trouble with Tryouts
by Stan Berenstain

<p>Sister Bear is a super soccer player. She should be a shoo-in at soccer tryouts &hellip; except for one little problem. Sister Bear is too small. Find out if Sister makes the team despite her size in this engaging early reader chapter ...

From #1 New York Times bestseller Mike Lupica!What happens when a star player ends up on the worst team? He either learns to lose or he stops playing the game he loves. These are the choices facing Jake, who has gone from champion to last place, tes...

MVP #2: The Soccer Surprise
by David A. Kelly

From the author of the Ballpark Mysteries comes a brand-new sports-themed chapter book series featuring the coolest club around—the Most Valuable Players!   The MVP club wants to save an old field house close to their school. They could ...

The path to victory starts on the sidelines, in this fast-paced new middle grade from sportwriting powerhouse John Feinstein.Twelve-year-old Jeff Michaels, son of a Philadelphia TV sports reporter, is just learning to play soccer on the new sixth-gr...

From Newbery Honor–winning author Eugene Yelchin comes another glimpse into Soviet Russia. For twelve-year-old Arcady, soccer is more than just a game. Sent to live in a children's home after his parents are declared enemies of the state, it i...