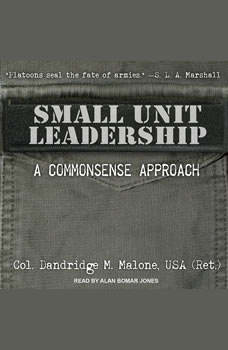 What does it take to get the job done? How do you get the men in your unit to do what you say? To follow you into battle and shoot to kill? How do you build the confidence that spurs men on to do their jobs, to stand by their leaders and each other? Find the answers to these questions and more, in this classic for those who have to get the job done—military or not.

The Weapon Wizards
by Amir Bohbot

From drones to satellites, missile defense systems to cyber warfare, Israel is leading the world when it comes to new technology being deployed on the modern battlefield. The Weapon Wizards shows how this tiny nation of eight million learned to adap...

As cyber attacks dominate front-page news, as hackers displace terrorists on the list of global threats, and as top generals warn of a coming cyber war, few books are more timely and enlightening than Dark Territory: The Secret History of Cyber War ...

Army of None
by Paul Scharre

Paul Scharre, a Pentagon defense expert and former U.S. Army Ranger, explores what it would mean to give machines authority over the ultimate decision of life or death. Scharre's far-ranging investigation examines the emergence of autonomous weapon...

A military expert reveals how science fiction is fast becoming reality on the battlefield, changing not just how wars are fought, but also the politics, economics, laws, and ethics that surround war itself. Singers previous books foretold the rise ...

The Warrior Elite
by Dick Couch

With a postscript describing SEAL efforts in Afghanistan, The Warrior Elite takes you into the toughest, longest, and most relentless military training in the world. What does it take to become a Navy SEAL? What makes talented, intelligent young me...

An urgent, prescient, and expert look at how future technology will change virtually every aspect of war as we know it and how we can respond to the serious national security challenges ahead. Future war is almost here: battles fought in cyberspace;...