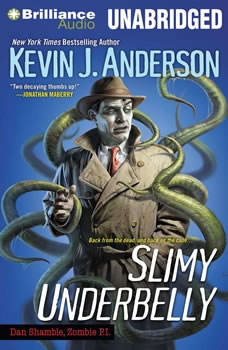 Flushing out evilThere's something fishy going on in the Unnatural Quarter. Bodies are floating face-down, the plumbing is backing up, and something smells rotten—even to a zombie detective like Dan Shamble. Diving into the slimy underbelly of a diabolical plot, Dan comes face-to-tentacles with an amphibious villain named Ah'Chulhu (to which the usual response is "Gesundheit!"). With his snap-happy gang of gator-guys—former pets flushed down the toilet—Ah'Chulhu wreaks havoc beneath the streets. While feuding weather wizards kick up storms and a gang of thieving lawn gnomes continues their reign of terror, Dan Shamble is running out of time—before the whole stinking city goes down the drain.…

Get 5% off your total order by adding 3 or more audiobooks from Dan Shamble, Zombie P.I. Series