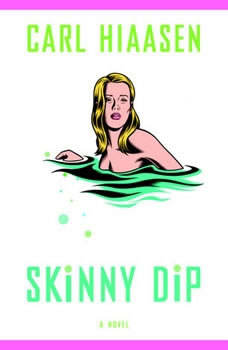 Chaz Perrone might be the only marine scientist in the world who doesn’t know which way the Gulf Stream runs. He might also be the only one who went into biology just to make a killing, and now he’s found a way–doctoring water samples so that a ruthless agribusiness tycoon can continue illegally dumping fertilizer into the endangered Everglades. When Chaz suspects that his wife, Joey, has figured out his scam, he pushes her overboard from a cruise liner into the night-dark Atlantic. Unfortunately for Chaz, his wife doesn’t die in the fall.

Clinging blindly to a bale of Jamaican pot, Joey Perrone is plucked from the ocean by former cop and current loner Mick Stranahan. Instead of rushing to the police and reporting her husband’s crime, Joey decides to stay dead and (with Mick’s help) screw with Chaz until he screws himself.

As Joey haunts and taunts her homicidal husband, as Chaz’s cold-blooded cohorts in pollution grow uneasy about his ineptitude and increasingly erratic behavior, as Mick Stranahan discovers that six failed marriages and years of island solitude haven’t killed the reckless romantic in him, we’re taken on a hilarious, full-throttle, pure Hiaasen ride through the warped politics and mayhem of the human environment, and the human heart.

One Christmas Eve, Whale Harbor is visited by a man who thinks he’s Jesus and claims to be looking for a game of poker. But, as usual, things are not quite what they seem. Having some version of the Lord in town for his birthday creates a stra...

This Sequel to the Acclaimed Cult Novel Is Now a Major Motion Picture Darryl Ponicsan's debut novel The Last Detail was named one of the best of the year and widely acclaimed, catapulting him to fame when it was first published. The story of two c...

A Decent Ride
by Irvine Welsh

Irvine Welsh returns to Edinburgh, the home of Trainspotting and so many of his novels since, with a new novel featuring one of his most iconic and beloved characters—'Juice' Terry Lawson—that's thick on the Scottish brogue, heavy on the...

ABAM.info presents two short comedic tales, suitable for children old and young. Leprecolony After accidentally killing a leprechaun, Steve and Jeff are beset upon by a legion of tiny emerald fellows, insistent on turning Steve's house into their n...

Spokane, Washington, is nearly perfect for most people, but Jack Fitzpatrick is not one of them. Hours after graduation and armed with his final paycheck from his nemesis, Mrs, Pohlkiss, Jack heads for Southern California determined to prove that mo...

Journey to the End of the Night
by Louis-Ferdinand Celine

Louis-Ferdinand Céline's revulsion and anger at what he considered the idiocy and hypocrisy of society explodes from nearly every page of this novel. Filled with slang and obscenities and written in raw, colloquial language, Journey to the End ...

The Last Detail
by Darryl Ponicsán

The Acclaimed Novel That Was the Basis for the Classic Movie Starring Jack Nicholson Unlike other branches of the armed services, the Navy draws it police force from the ranks, as temporary duty called Shore Patrol. In this funny, bawdy, moving no...

Chaz Perrone might be the only marine scientist in the world who doesn’t know which way the Gulf Stream runs. He might also be the only one who went into biology just to make a killing, and now he’s found a way–doctoring water samp...

The 1960s. A world before modern building materials. A world where man only dreamed of space exploration. A world in which everything was made from paper. The intrepid crew of the Good Ship Corrugated set off into the black in search of excitemen...